Well, it's day 8 of the Mouse Movement Game Jam!  The jam officially closes on Saturday, but I'm going to have to submit tomorrow because I'm going camping on Saturday, and won't even have my laptop, much less Internet access.

But I'm feeling pretty good about the state of things.  The level is hard — it often takes me several tries to get through it, and I've played more than anybody.  Yet it's definitely skill-based, not mostly luck.  When I fail it's because I didn't guide my little zombies properly.  So I think the level design is all right.  And I was able to squeeze in some new features, like a sidewalk pit that periodically spouts fire. 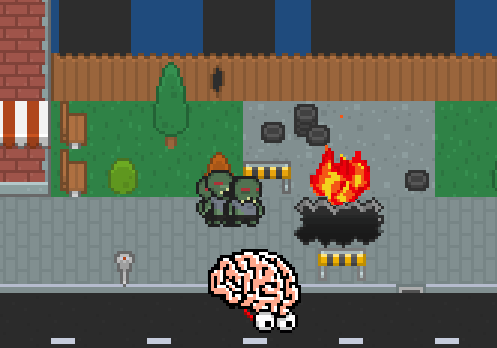 Tomorrow, I have mostly cosmetic things to do:

But that's about all I can think of at the moment.  A couple more hours should do it!

lead your zombies to mahem and glory!