Well, it's Day 2 of our work on Dr. Yond's Zombie Experiment, and I'm thankful that it's a 9-day jam!  Good progress has been made, but there's still a lot to do.  Let's get right to the video:

Zombies are able to run, jump, and climb up and down pipes.  They can survive a short fall, but too large a fall will transform them from "undead" to simply "dead."

I'm doing this game jam in part to shake out Mini Micro, and today that paid off in a big way.  I've been testing Mini Micro mostly within Unity, where everything has always looked sharp and crisp.  My partner in this project tested it as a Windows build, and it looked like this: 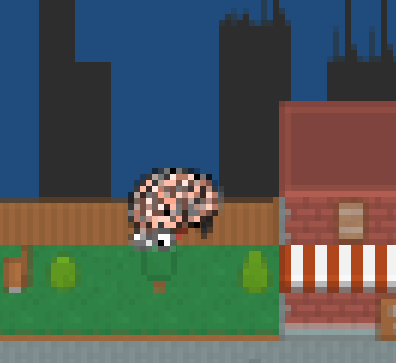 Yikes!  It took some digging to figure out why it looked so junky in builds.  For the record, it was because my dynamically-loaded textures were created by using new Texture2D(2, 2) instead of new Texture2D(2, 2, TextureFormat.ARGB32, false) — the latter one instructs Unity not to create mipmaps; the former one just cheerfully goes ahead and creates and uses these cruddy reduced versions of your texture.  Lesson learned, and Mini Micro improved!  (Improvement to appear in version 0.7.)

lead your zombies to mahem and glory!