This game is an entry for the Gaming Like It's 1924 game jam.  Game design and artwork are by Bryan Sullivan and Andy Robb; coding was done by Joe Strout using Mini Micro.

This is our first collaboration, and Andy & Bryan's first game jam.  We really hope you enjoy the game!

Nice concept, has some sweet scenes. I liked how early in the game the three siblings asked things for each other rather than themselves, and how i could give payback to some bullies later on, like buying the 8-track for the boy whose bully sister wanted it, and buying a newer game console for the boy whose brother wouldn't let him play with his game boy (I knew it would lower my score, but it was too satisfactory to do).

Scores seemed a bit weird though - sometimes I'd get low/zero score even with what seemed like a correct gift. Was I supposed to give coal to kids who were excited over a thing but weren't particularly mean, or even rude, to anyone? I also got zero points for giving the Xbox Assassin's Creed game to the kid who wanted it and was wearing the Xbox shirt, and 0 points for giving the PS version for the other kid whose shirt I didn't look at. Some of the wishes were open to interpretation, and I thought I chose the best option (or one of them) but got a low score in most of those cases.

In the gift-throwing minigame it's a bit unclear at what exact point you're supposed to throw the gift, a visual indicator would have been nice. On the sledge, I mean. Otherwise it works well!

The music provides a nice mood and I can see you made a game around it, but the game is a bit too long to listen to the loop for the entire time.

Not sure if you were supposed to play through the game by memorizing everything, but as they got quite complex I got lazy and cheated by writing the wishes down.

Overall, the game is nice and has a very sweet mood (including the ending, though I didn't try giving her coal). The graphics and gameplay work well, too!

Holy crap, that was longer than I intended. Sorry! xD

Thank you for the detailed feedback!  I think we may have goofed on the Xbox/PS kids and got them backwards (er, I mean, they put on the wrong shirts that day!).  No kid should need coal unless they are either rude to Santa or mean to another kid.

And yeah, you could certainly cheat by writing things down.  At one point the plan was to add a time component, so you would want to go quickly and not take time to write things down, but the puzzles get so intricate I think that would have just made it too frustrating.  Though it might have addressed the music-looping issue, too.  :)

Anyway, thank you for playing — it was a fun game to make!

The timer idea could work if we could see the kids' wishes while giving them the gifts, but yeah, otherwise it'd be pretty frustrating.

A quick design blurb (I'm Andy Robb, one of the graphic designers for the game!):

This game features the song "Waiting at the End of the Road by Paul Whiteman And His Orchestra" which was recorded in 1924. We felt the song had a Christmas feel which lead to us making it a Santa centered game.

From there, we focused on the legacy of the toys made in the 20s (as that was the first big wave of Christmas commercialization targeted at selling toys to kids) and how those concepts evolved through the decades!

Played it thru; got score 11374, the questions definitely got trickier from the 2000s onwards. Does test the mind a little, good effort! 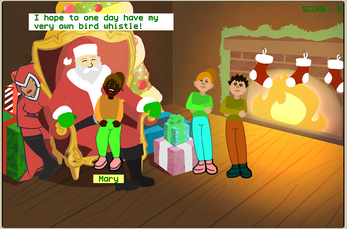 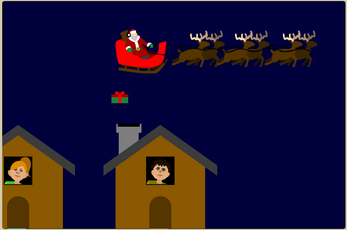